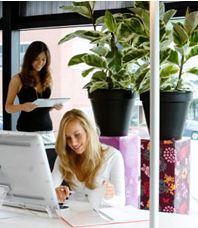 In the drive to be more competitive, some companies may look to reducing the number of plant displays they have in their offices to reduce costs.

However it has been proven in repeated scientific investigations, that having plant displays in the office can actually save companies money by reducing staff absenteeism and increasing productivity.

One study looked at the effect on the health of staff in the radiology department of a Norwegian hospital. Once plants were placed in the department and artificial daylight was introduced, the level of health complaints amongst those studied fell noticeably. This  resulted in a permanent reduction in absence due to illness from 15% to 5% within 6 months.

A recent article in the Daily Telegraph reported on a study conducted by Tina Bringslimark of the
The Norwegian University of Life Sciences. This research showed that having plant displays in the office can improve workers health and reduce the number of days they have off sick. Thereby reducing a companies overheads and making it more competitive in times of recession.

Tina Bringslimark, an expert in environmental psychology, looked at 305 office workers in three offices with differing amounts of greenery.

"We investigated the amount of self-reported sick leave there was and compared it with the amount of plants they could see from their desk.

"The more plants they could see, then the less self-reported sick leave there was."

Her study builds on work at the Norwegian institution (see findings above) which found that plants appeared to reduce office workers' fatigue, dry throats, headaches, coughs and dry skin.

"There are likely to be several explanations for this," said Prof Grete Patil, of the university.

"Possibly the most straightforward is that plants and the microbes in the soil are good at removing volatile, organic compounds that can affect health. There could also be a psychological explanation in that people believe plants are healthier and are likely to evaluate their own health more optimistically."

This research follows on from earlier research by Prof Tove Fjeld at The Norwegian University of Life Sciences. Over 4 studies ' in an office, schools & a hospital ' Fjeld like Bringslimark found that plants in the workplace reduced minor symptoms as detailed above.

She also found that the air was cleaner in the planted rooms and that planting could have a very positive effect on sick leave; following the study in the hospital x-ray department sickness was reduced by more than 60%.

An American study, at Washington State University, found that plants reduced workers' stress and improved their reaction times by 12 per cent. Those who worked alongside plants performed better than those in a plant-free zone when they took part in a boring computer test that required concentration for 20 to 30 minutes. Workers in a green office also had lower blood pressure and less mental fatigue.